To prepare the pretzels, start by preparing the yeast: place some warm water in a bowl and dissolve the yeast in it; mix in the sugar then add to the sifted flour.

Stir quickly, just long enough to combine the ingredients. Place the dough in a bowl, cover with cling film and leave to rise in the oven with the light switched off for at least 1 hour, until the dough has doubled in size.

Now for the mix: dissolve the salt in the water, place the sifted flour in a bowl, add the salted water, the yeast, the softened chunks of butter and knead vigorously with your hands into a smooth and even dough.

Put the dough into a bowl, cover with cling film and leave to rise in the oven with the light switched off for a couple of hours. When the dough has risen, knead it again on a lightly floured pastry board (the dough should not stick to your hands).

Split the dough into eight equal parts and roll them into strings about 50 cm long, leaving the ends narrower than the centre and flattening them down.

Form the long string into the typical ‘slow knot’ shape by taking the two ends and twist one over the other and press them down.

Place the pretzel shapes on a floured tea towel and leave to rise for another 20 minutes.
In the meantime, boil 4 litres of water, and when it comes to the boil, add 3 tablespoons of bicarbonate of soda.
Using a slotted spoon, lower the pretzels into the water, no more than two at a time, and cook until shiny (30-40 seconds). Drain with the slotted spoon.

Place the pretzels on a baking tray covered with baking paper, then sprinkle all over with coarse salt (or flakes). Bake the pretzels for 20 minutes in a preheated static oven at 220° and remove when they have turned brown. Leave the pretzels to cool then enjoy with cheese and frankfurters.

To stop them from going soft because of the salt, we recommend hanging them on a string to dry out rather in a box.

The dough can be frozen then when required, removed from the freezer, thawed in the fridge and then left to rise at room temperature for at least 2 hours before forming the pretzel shapes and leaving for the final rise. 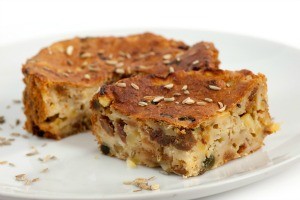 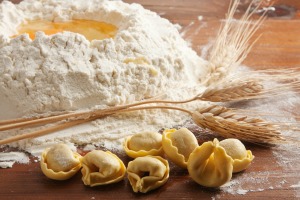